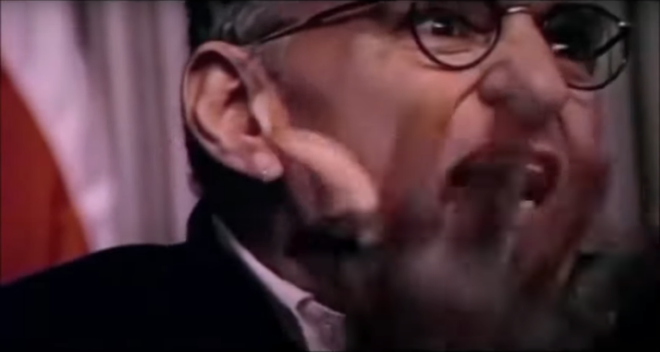 When I moved to New York at 28 I’d been out of the closet for four entire years, but hadn’t even begun to find my footing. I’d never even had sex with a man, not really. I said it was because I was a charmingly unlucky disaster who couldn’t get a date, but it was really because I was afraid. I’d been raised in religion in a homophobic family, bullied my entire childhood, traumatized by the death of my gay best friend Michael, who graciously let me live vicariously through him while I toiled at the unconvincing song-and-dance of the closet. I was out now — mostly, anyway — but shellshocked and adrift, locked up by shame and fear of reprisal and the lived knowledge that love and vulnerability and honesty were dangerous.

I found my way to Larry Kramer circuitously, like this: I moved to New York in part because of the legend of Madonna — the suffocated, traumatized, queer-adjacent misfit from the very Detroit suburb where my Dad lived, who gathered her guts and broke for the big city the minute the door opened and never looked back. Via Madonna, I learned of Jean-Michel Basquiat and Keith Haring; via Basquiat and Haring, the specific chapter of the AIDS epidemic that ripped through 1980s and 90s New York, especially the below-14th-Street quarters that felt to me like some hallowed spiritual vortex to another time. And via that plague, that moment, that New York, I arrived at Larry Kramer.

One of those first New York summers, as the Great Recession raged and rendered me only sporadically employed, I spent entire days lolling in the haze and humidity of the Sheep Meadow in Central Park, devouring Kramer’s novel Faggots, shocked, offended, delighted, and guffawing all at the same time — sometimes all on the same page. At first I felt embarrassed by it — I’d hold it in my lap or with my hands splayed across the cover so no one would see the incendiary title and suggestive cover art — but the more the book pulled me in, the more I forgot about the word splashed across the cover. Or maybe I just slowly stopped caring.

In any case, one day on the subway up to 72nd Street to make my way into the Park, a guy spied the book in my hands, pointed, laughed, and said, “What a book, right?” We chatted and chuckled about it until he got off at Columbus Circle, and this tiny thing — two gay strangers talking about a gay book — felt like a milestone. It seems ridiculous now that simply openly reading a book on a train would feel like an act of self-actualization, but I guess it’s a testament to how buried inside myself I was. Because it did. I felt part of something — the mythic “gay community” that is so often talked about but so rarely feels real to many of us. It felt like some kind of thread had finally reached me and embedded itself in my skin, connecting me to this guy on the subway, and directly back to Larry Kramer, and the guerilla revolutionaries of ACT UP, and Cleve Jones and Audre Lord and Harvey Milk and Marsha P. Johnson and Sylvia Rivera and all the pink triangle queer folx who died in camps all the way back to Oscar Wilde and fucking Sappho herself — “faggots,” all of us. Normal Hearts. A confederation. A genealogy. A birthright.

As that magic blood-jolt soaked into my tissues, what came in behind it was anger. The kind you hear in Kramer’s voice as he screams “Plague!” at his bitterly divided ACT UP compatriots in that 1991 meeting. I heard it over and over, on a loop. Rage. I felt an indignation — about what Larry and Cleve and Marsha and Sylvia and all of them had been through, and what I had been spared by luck of birth. Indignation at how factious our various communities have become, united only by an acronym. Indignation that, all these years later, as gay marriage replaced AIDS as the queer issue du jour, we seemed not to have learned anything, that there were queer people lecturing each other about politeness and mannered appeals to reason, as if any of that had ever helped us, or any other marginalized people, before. Indignation for myself, who’d been so beaten down that his own identity filled him with fear, and indignation at myself for not being strong enough to overcome it, to do something with it.

That was a long time ago, another person ago, a child in many ways. Things are different now — that indignation, blessedly, shoved me forward. But I still, all these years later, haven’t fully figured out exactly what to do with it. I still haven’t fully touched down on a place where I’m no longer afraid. I still haven’t yet found all the guts that Larry Kramer had, the willingness to say all the quiet parts out loud, the profound lack of fucks to give for all the things that don’t matter, that never have and never will, no matter how hard they try.

But today I hear Larry’s voice in my ears again, over and over, on a loop. Today, I’m going to start listening to it.

John is a writer and performer in Chicago. You can read more of his writing on Medium (where this essay also appears) or his Substack newsletter, support him on Patreon, or connect with him on Twitter and Instagram.

GIVE ME ATTENTION OK THANK YOU!

Look At my crow's feet on Instagram dot com

Read along as I scream at persons on twitter!